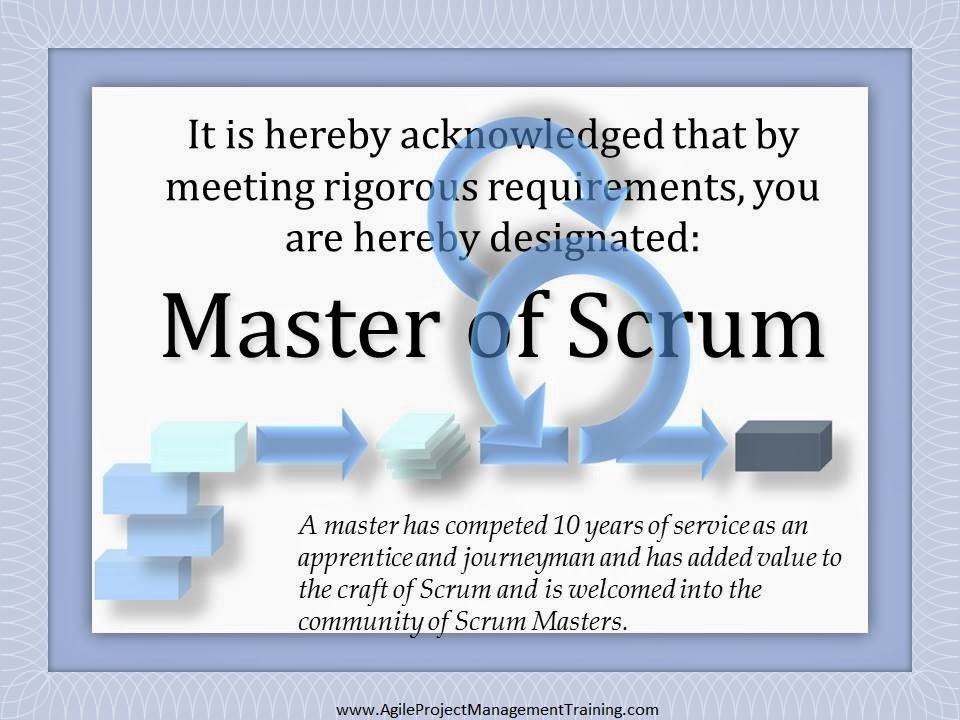 Why Scrum “Master”? What about Scrum Apprentice? Maybe we need a Scrum Jedi?

I learned the term Scrum Master back at the turn of the century (I like how that sounds). I first heard it from Ken Schwaber himself. At that point in my career, I was a true and tried project manager that had recently earned his PMP. I was a self-taught project manager, and looking back, my instincts and style were better suited for Agile, but I happened to go down the formal PM path first. After 10 years of experience, I had come to the conclusion that project management was a “craft”.  I believed it then and I believe it even more now, which is why I struggle with the term “Master.”

I was a carpenter before I was a project manager. I was the only honors student taking wood-working classes in high school and I worked as a carpenter’s apprentice during the summer while I was in college. I had tremendous respect and even awe for the master craftsmen I worked with. In carpentry, the term Master is reserved for the likes of Norm Abram. Also, to be a union carpenter, you have to go through a rigorous apprentice and journeyman program before you can get paid as a true master carpenter.

In history, you had to earn the term “Master” to be seen as the top of your craft. Wikipedia has a good definition:

“An aspiring master would have to pass through the career chain from apprentice to journeyman before he could be elected to become a master craftsman. He would then have to produce a sum of money and a masterpiece before he could actually join the guild. If the masterpiece was not accepted by the masters, he was not allowed to join the guild, possibly remaining a journeyman for the rest of his life.”

I think the intent with the term Scrum Master is that the title should be reserved for those that have earned the title of Master, but that is obviously not the case. There is no job requirement or career path to become a Scrum Master.  Most of us have had some type of career path as we developed our skills; e.g. in software engineering, there is a typical path of analyst, developer, designer, architect or in project management: project coordinator, project manager, senior project manager, program manager.

So, how does someone earn the designation of Scrum Master? Until recently, it was just take a 2-day class. Now, at least there are exams to test your knowledge of Scrum. It is surprising how we have come to a place where the term Master can be designated without any true effort or experience. Most of us have had to show both experience and knowledge to get the certifications we have. PMI, for example, requires the PMP and the PMI-ACP designation be based both upon experience and knowledge.
I am not sure if there is a way to backpedal to introduce qualifications for Scrum Master, so maybe we need a new term that actually requires that someone has proven themselves. How about Scrum Jedi? Just a thought… All I ask is that I get credit for the term when it goes viral…